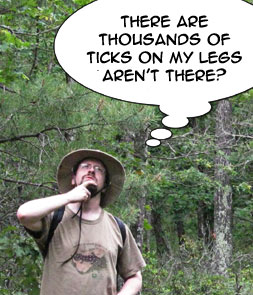 Less a leisurely hike, than a lost episode of Survivorman, Jerry and I spent the better part of a beautiful Saturday enduring the aggressively rustic Michael Huber Prairie Warbler Preserve, a 1227 acre bird sanctuary in the heart of the NJ Pine Barrens. The area is ‘managed’ by the NJ Conservation Foundation.

Our first disconcerting moment occurred immediately, before entering the grounds. The parking area notated on our map was not to be found in the real world. Spending a couple deliberative moments we decided the “P” on the trail guide stood for “Please leave your car on the side of the road”. Later, during one of our many doubling back moments, we wondered if a maniac, perhaps a dyslexic suffering from dementia, drew up these directions.

The main route, the White Trail, was suitable for man, horse or Sherman tank. Cutting a wide berth through the forest, the White Trail connects with other colored trails, smaller segments restricted to people with feet. Hey, that’s us.

After roughly a half-mile heading north on the White Trail we came to a fork and noticed a gate to our left. Attempting to use logic, we decided this couldn’t be the correct route and continued on. Eventually we realized we’d gone off the grid. The first clue was when we found ourselves exiting the forest about a mile east from where we entered. We headed back and took, what turned out to be, an abandoned route. We cycled back yet again and, taking a squirt on logic, crossed the bridge beyond the gate. This put us back on track. It would also become symbolic, like crossing the gates of Hell.

With the bridge to our backs we stopped to admire the view. The path zoomed straight before us, the forest wide open and welcoming. But then, inexplicably, I suddenly had that same ominous feeling as Sheriff Brody during the dolly zoom beach scene in Jaws.

In order to loop through the park and create a manageable hike we needed to get off the White Trail. The first connector would be the westerly Green Trail, running parallel to, and then crossing, Gum Spring.

It appeared the Green Trail has seen little recent action, perhaps as far back as the Reagan Administration. Occasionally thick grasses threatened to cover the road completely. We eventually came to a tree sporting a 15’ ladder with a seat on top. A hunting stand? Maybe it was for bird watching since hunting was prohibited. As we discussed its purpose, our nice little hike turned into a full-fledged tick assault. Mayday!

The bloodthirsty arachnid bastards swarmed on us quickly. We picked, plucked and brushed with extreme prejudice. It was a lost battle. We were overrun. Our insect repellent, short on Deet, just pissed them off. We made haste, flicking and picking towards the 2nd part of the White Trail. Time to cut short our trip.

We found the connecting road washed out from the stream, which had overflowed its banks. We jumped Gum Spring from a small hillside and awaited the appearance of the Yellow Trail, which would turn us southwest and take us away from the- shudder- Godforsaken Green Trail.

We consulted the map multiple times, but not finding a yellow marker, we eventually came to a split and suspected an unmarked road to be the Yellow Trail. The unkempt- shiver- Green Trail that we had just endured left us wondering if we could trust any guideposts again. It seemed the whole interior of the preserve was completely ignored by caretakers. Perhaps they were devoured by ticks. We wondered when the last time hiking boots had actually touched this place.

Of course, that’s when we saw the detritus of humanity including a group of overturned steel drums, a rusting peice of machinery, a large mysterious elevated structure housing a lighting unit with a dangling power cord connected to nothing. The large swaths of wooded brush punctuated by the appearance of odd items caused Jerry to posit we may have somehow stumbled onto the same patch of land as the poor slobs on Lost.

As we walked the unmarked road, hoping (against hope) that it was the mysterious Yellow Trail, I stated the obvious to Jerry, “taking this path is a gamble”. We could have just stayed on the White Trail and hung a left on another- eye twitch- Green Trail. However, that would have added almost 2 miles to our trip.fungi

I mentioned a Tolkien line to Jerry, unwittingly telegraphing our immediate future. “Shortcut ways make long delays”. It wasn’t much after that statement that this mystery trail came to a large open area and the end of the road. A large watchtower, perhaps 20’ high, with an attached ladder stood to the side. A metal ladder leaned against it, a grey paint tray with roller dangling from a rung. “A work in progress”, I pondered as I climbed the tower imagining it toppling forward, my riding it to oblivion like Slim Pickens in Dr. Strangelove.

I reached the top and crawled inside. It was crouch-level only, a small chair sitting in the middle of the tiny felt-covered room. I scanned the forest, trying to discern if the trail continued beyond our ground level p.o.v. No dice. I sent another tick flying into space and began the climb down the steep ladder. Visions of being choppered out with broken legs and covered in thousands of red ticks crossed my mind. I stepped down a little slower.

We decided to turn back to the blessed White Trail. Maybe we missed an actual yellow marker. Incredulous, we stumbled upon a tree featuring yellow signs, most obscured by overgrowth. The entry point was a poorly defined path, to put it generously. Relieved we had found the elusive Yellow Trail we soldiered on bracing for the final leg: another – gulp, scream, low moan- portion of Green Trail.

There literally was no pathway. Where we thought the Yellow Trail a poor semblance of a road, this new stretch of Green Trail had no track at all. Only green markers pointed a vague way forward through a dense and ever-darkening forest. A bridge of questionable stability sat on rotting logs, a green marker positioned on the other side taunting us. We walked over cautiously then found ourselves peering yards ahead praying for the next green marker to reveal itself. We were in Lewis and Clarke country: slashing branches, jumping lichen-covered fallen trees and smashing through foliage just to make our way through.

I should pause to say that I, personally, enjoyed much of this including the opportunity to get some cool photos. termitesIf it weren’t for the ticks (which made for a miserable ordeal) this would have been a challenging, but fun, day. Jerry was having none of it. “State forests are not like this”, he would sigh with exhaustion verging on despair. Incidentally, about 2 months earlier my office location changed causing me to walk to work each day, approximately 10 miles a week. Frankly, I was better prepped for this adventure. I had kayaked Batsto the week earlier and knew the tick situation was nasty this year. Endless spring rains had apparently turned the Pine Barrens into one giant tick breeding ground. But, I never experienced anything like this. We must have disrupted a nest. Or two. Or three. But I digress…

I mentioned soberly to Jerry that if these green markers stopped leading the way then we could find ourselves in deep doo-doo. We we’re too far along to turn back, the markers not apparent from the rear view and no trail to point our way back. Moving forward in the right direction with the possibility of missing trail markers made us both increasingly nervous. Fortunately, gaps in the tree line showing the sun confirmed we we’re, at least, going in the right southerly direction.

Luckily the markers kept coming in consistent intervals and we, and our new friends the Lonestar Tick Community, made our way out of the woods. Altogether we did about 5+ miles.

If we don’t get Lyme it will be a miracle of biblical proportions. Reading up on the Lonestar Tick it appears this little bastard is not a transmitter. Here’s to hoping this day is really behind us and we don’t have to face a future eating steak with a straw.

So to my fellow explorers: Thinking about the Huber Trail? First give yourself a Deet shellac, bring a change of clothes and a trashbag for what you started with. Don’t forget a compass. Or Machete. Honestly, a hazmat suit and chainsaw might be your best bet. And if you encounter the Lonestar Tick, which you will, please give him our regards.

Our Site At A Glance

Another Rewarding Way
To Spend Your
Time
Between Walk
s!