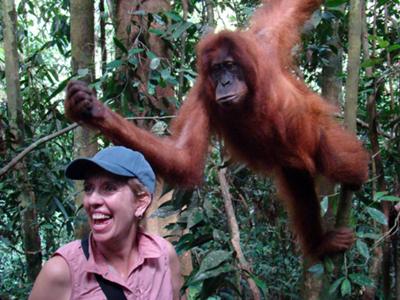 Since 2002, my husband, Allan, and I lived in Asia and enjoyed a lot of travelling and hiking adventures. For a couple of weeks in the spring of 2008, we went into the jungles of Sumatra for some "50 Plus" adventure opportunities. Here, I enjoyed one of the best walking experiences of my life.

To get to our destination, Bukit Lawang, we had to suffer a long, jarring truck ride. Bukit Lawang is a tiny Muslim community with about 600 people. It is situated beside one of the biggest national parks in Indonesia. This park is the home of the largest population of orangatans in the world.

Every morning, I would walk down the river, and jump into the park's "ferry" which is simply a dug-out cannoe rope towed by a park's employee. Then I would walk past the Park's headquarters and watch the rangers feed some of the less independent orangatans, most of whom had been poached when young and then abandoned when they got too big for their owners to handle. I was often the only foreigner there as tourists don't come anymore. Earthquakes and Al Qaeda have scared them off.

I loved the orangatans and I loved the park's staff. The fact that some of the rangers were barefooted was a testimont to how poorly funded this operation was. Although poor, the rangers laughed when I suggested a Western funding campaign might help them. "Who would you send the money to?" they asked. "You send it to the government, they will steal, you send it to me, I will take, too." Honest and dedicated people in a losing battle to save the orangatans, their "brothers" and "sisters", against illegal logging and poachers.

A range of jungle treks were available for a nominal price. My husband and I took advantage of this and were delighted to see orangatans in their natural habitat, their babies and their tree-top nests. During one of these walks with two local guides and a few German tourists, we were surprised and delighted by an adolescent male who crept down from his tree and tried to "kidnap" two of the young German girls. He grabbed their hands and tried to pull them away from the group. The girls had a difficult time resisting as he was mighty strong. The guides were able to deter him with a piece of fruit. He ate the fruit then tried to climb into my arms. No easy feat as I had camera equipment which I quickly shed for fear of breakage. Apparently, he was raised by humans but abandoned when he got too big. He was heavy, maybe 50 pounds, and he was so human-like that I was emotionally overwhelmed by the encounter. Looking into his eyes was like looking into the eyes of any human child. This young fellow was lonely and needed some inimate time. We hugged for a while then he left us.

Our Site At A Glance

Another Rewarding Way
To Spend Your
Time
Between Walk
s!